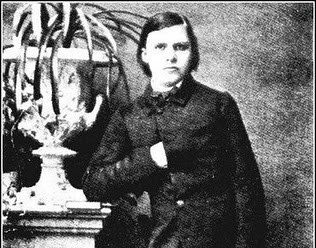 1844 – 1879: This first room is dedicated to Nietzsche’s childhood and youth, his university studies and the time as a professor in Basel. 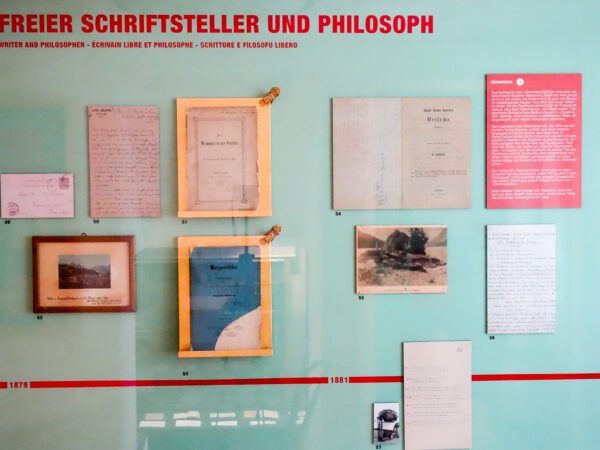 1879-1900: The second room is devoted to the years Nietzsche spent as a independent author and philosopher, as well as his last phase of life after the mental breakdown. 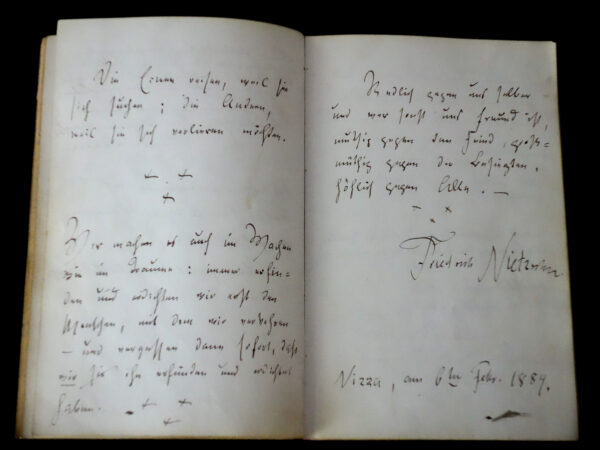 This exhibition space documents the critical impact of Nietzsche’s works. 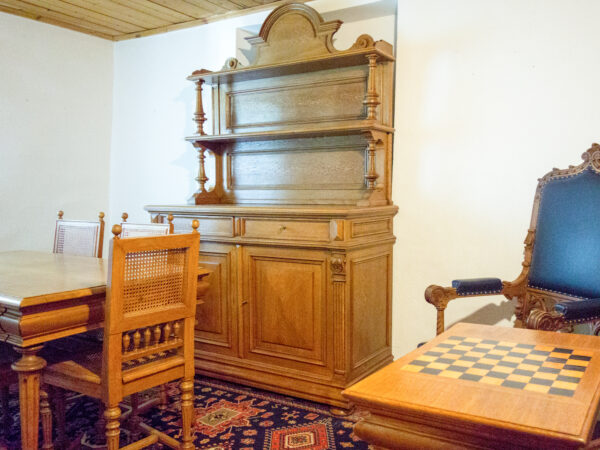 This exhibition space houses some of the furniture Nietzsche owned during his years in Basel. 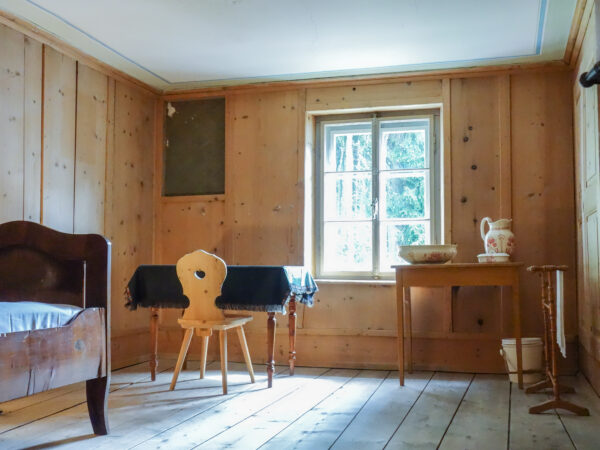 The upstairs room in the Durisch house, which Nietzsche rented for seven summers (1881 and 1883-1888), has been kept in its original condition. 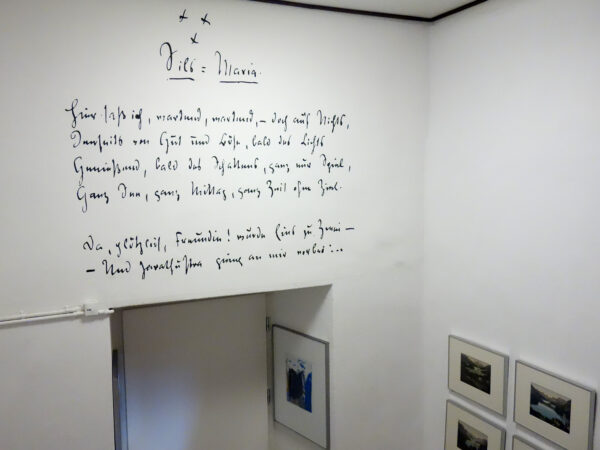 Documents and photos in the corridor of the upper floor provide information about Nietzsche’s seven summer stays in Sils Maria. 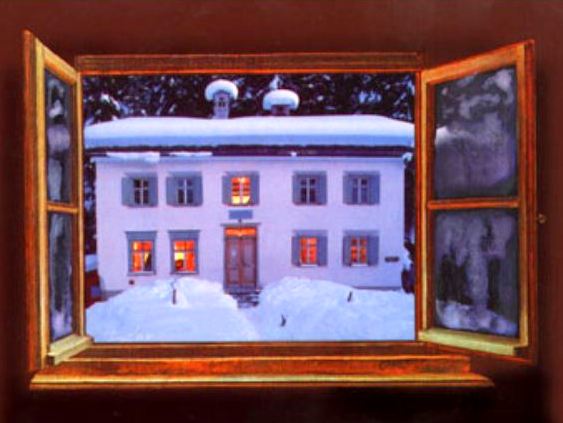 Since 1978, the Nietzsche House Foundation in Sils Maria has offered artists whose work is related to the region or to Nietzsche’s thinking an opportunity to realize exhibits at the House.

The information panels and display cases show photographs and manuscripts from Nietzsche’s childhood and youth. Documents and photos from his university years up until he was named a professor in Basel are also on display. During Nietzsche’s time in Basel, he met Richard Wagner, to whom he dedicated his first book, “The Birth of Tragedy out of the Spirit of Music”. Their friendship was essentially ended with publication of Nietzsche’s “Human, All Too Human”.

While working as a professor in Basel, he also wrote several books. This period ended in 1879, when he was forced to resign due to health issues.

Nietzsche’s life as an independent author and philosopher began with a trip to the Graubünden Alps. Despite his ill health, Nietzsche led an intense life, moving frequently yet with important encounters, such as with the young Lou von Salomé. During this decade, Nietzsche wrote and published his major works. Forty exhibition items illuminate this eventful period.

The second exhibition space also documents Nietzsche’s collapse in the first days of January 1889, and the last years of his life, when he suffered from mental illness, until his death in 1900.

The third exhibition space contains Oscar Levy’s library, though the library itself is not open to the public. One display case holds Nietzsche’s original manuscripts and first editions. The displayed items will be regularly replaced by other museum holdings and are part of the comprehensive Rosenthal collection, which the family donated to the Nietzsche House.

In 1991, the Foundation was able to acquire the furniture that the young philology professor had ordered for his first own household in Basel at Spalenthorweg 48 in Naumburg and that he kept through several changes of residence until the end of his university career in Basel (May 1879). In its bourgeois solidity, this furniture forms a stark contrast to the great simplicity of Nietzsche’s room, which lies directly opposite it. The contrast of the two interiors reflects Nietzsche’s journey from respectable university professor to “hermit” and “fugitivus errans” (as he saw himself). Among the items to be admired in this room is the original armchair that Nietzsche purchased for his Basel household and gave to his doctor, Professor Rudolf Massini, in 1879, when he resigned from his professorship.

The upstairs room in the Durisch house, which Nietzsche rented for seven summers (1881 and 1883-1888), has been kept in its original, simple condition. The furnishings are from Sils’ oldest hotel ‘Alpenrose’, where the philosopher often had lunch.
To the left of the window, you can see a piece of wallpaper with a pattern that Nietzsche selected and paid for himself in the summer of 1883. It is no coincidence that both the tablecloth and the wallpaper are in shades of green. In this case, too, the philosopher himself chose the fabric. Nietzsche devoted much attention to the “things that surround us” which determine our day-to-day life, as he knew how they directly affected body and spirit.
The philosophy professor Paul Deussen, who visited Nietzsche in Sils Maria in September 1887, described his friend’s room in his memoirs: “The next day, he led me to his lodgings, or, as he said, into his cave. It was a simple room in a farmhouse, three minutes from the road: Nietzsche rented it during the season for one franc per day. The décor was as simple as one could imagine. On the side stood his books which I mostly still remembered from earlier times; then came a peasant-style table with a coffee cup, eggshells, manuscripts and toilet requisites in a colorful jumble extending to the unmade bed, via a boot j-jack with a boot jammed on it.”

A facsimile of Nietzsche’s “Sils-Maria” poem hangs above the staircase leading to the first floor. Translations of the poem can be found on the left-hand wall of the staircase.

A display case provides information about the seven summers Nietzsche spent in Sils Maria and his encounters with contemporaries in the Engadine. The focus is on two representatives of his many contacts and relationships during his stay here: the writer Mathilda von Meysenbug and scholar and philosopher Heinrich von Stein.

A stained glass window by Gerhard Richter and a small reading area for visitors are located at the end of the corridor.

Virtually no other philosopher has so strongly influenced the visual arts – both modern and post-modern – as Friedrich Nietzsche. His exceptional popularity in the European art scene comes as no surprise if we think of the high importance this philosopher again and again accorded to art. In a fragment from the summer of 1885 (posthumous fragments), Nietzsche wrote:
“ In the main, I think artists know more than all of the philosophers up to now: they never lose sight of the main track on which life runs, they love the things of ‘this world’ – they love their own senses.[…]”

Since 1978, the Nietzsche House Foundation in Sils-Maria has offered artists whose work is related to the region or to Nietzsche’s thinking an opportunity to realize small exhibits at the Nietzsche House, generally they last for one year, from summer to summer (see also “Archive of past special exhibits”).